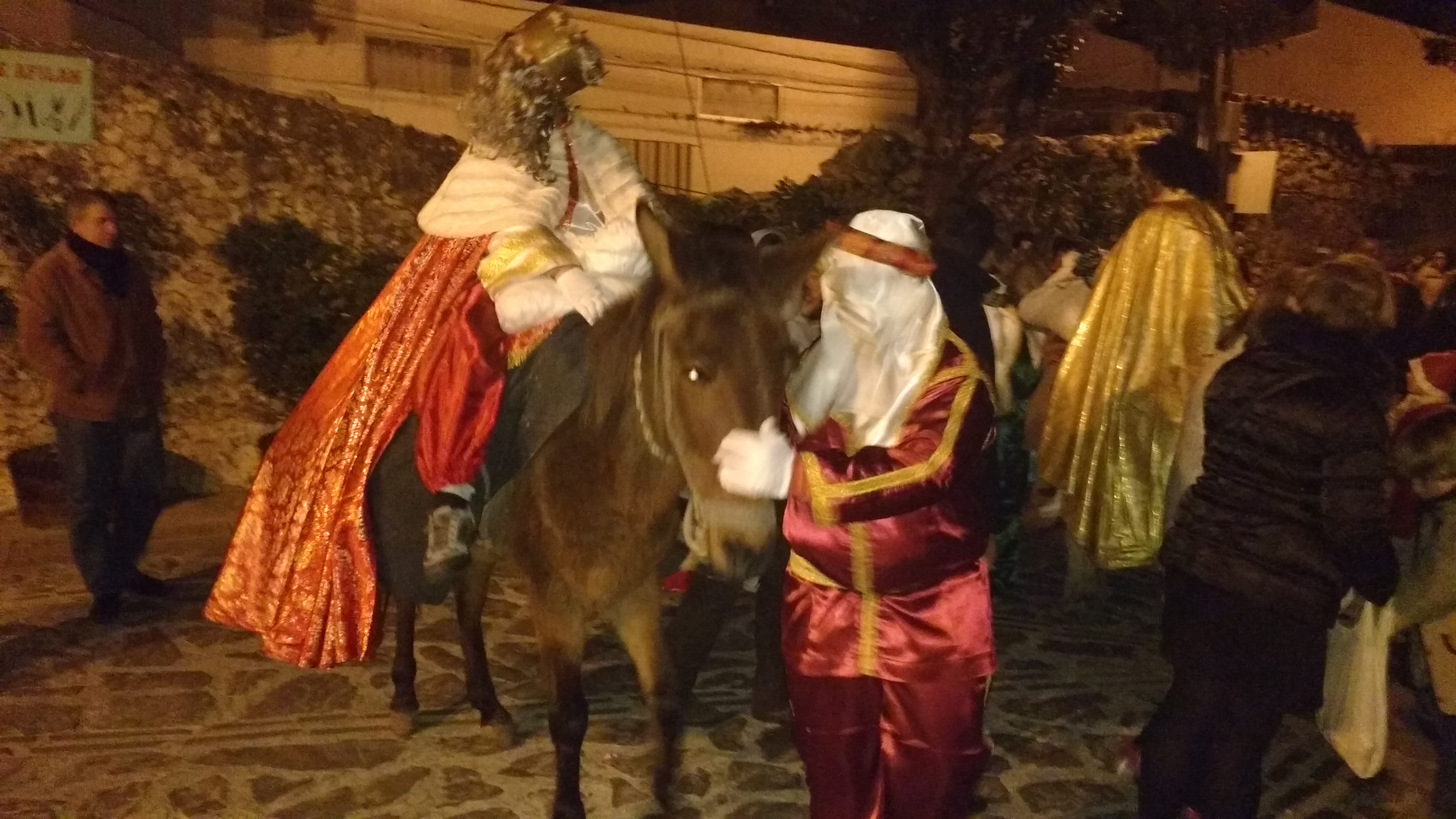 One of the three main celebrations over the Christmas period in Spain is the arrival of Los Reyes Magos, otherwise know as the Three Kings or Three Wise Men. The Spanish barely have time to recover from the New Year’s Eve celebrations before they start all over again with the preparation for the visit from Los Reyes Magos (The Three Kings or Three Wise Men) on January 6th.

Children all over Spain are excited. They finish school around December 22nd and every year I wonder how they cope with the waiting.  Spending the school holidays waiting for the Three Kings to arrive with their presents, must be quite a challenge.

By January 5th the levels of excitement have risen to a peak. There are last minute Christmas shoppers everywhere and the Christmas Carols are blaring away in the shops. This evening in every city, town and village in Spain the Three Kings will make an appearance in a procession.

Around 6.00pm the streets will be lined with people, old and young alike waiting for it all to happen.

The Three Kings and their helpers will throw out sweets and small presents to the onlookers as they go around. There’s a mad scramble to catch them.

I remember one year in Burriana, Castellon, the Kings threw out fresh artichokes. While admittedly, this resulted in a tasty supper afterwards, we had to dodge quite a few as they flew through the air like missiles.

Last year I wanted to see the processions in both Ubrique and Benaocaz as I hadn’t seen them there before. So, at around 5.30pm on January 5th, we drove down the mountain from Benaocaz to Ubrique, where people were starting to line the streets in anticipation.

The Three Kings in Ubrique

At 6.00pm, the procession started with the Three Kings coming down the main street, each one on a separate float with their helpers. Generous handfuls of sweets came flying over our heads while we dodged them trying not to get hit.

Children and adults alike scramble around on the ground to pick them up. A lady behind me pulled out a carrier bag for her children to put them in. They had come prepared.

Each float was followed by a band playing music. I love this about Ubrique. There’s always a band in every procession. The musicians of the town played for the crowd and the excited children. The atmosphere was electric. When the floats had passed the through the main street and were making their way around the rest of the town, it was time for us to drive back up the mountain to Benaocaz to watch the procession there.

The Three Kings in Benaocaz

Traditionally, the Three Kings tour Benaocaz by donkey, but I had been told that they hadn’t done it for the last few years preferring to go around on more modern forms of transport. I have to admit that I was disappointed to hear this. I wanted to see them riding around in traditional style.

The atmosphere was buzzing when we arrived. With the village being as small as it is, I was worried that if they went around by car, I might miss them. So, Benjamin dropped me off while he went to park.

“They’re up by the church,” I heard a man tell a passing family. “What? You mean this way?” I asked him pointing up the steps.

I raced up the steps listening to the music that accompanied the Kings as I ran towards them.

And then, suddenly right before me, there they were in full tradition. Each King on a donkey. I couldn’t believe my luck.

Most of the processions I’ve seen over the years involve the Kings passing the crowds, but in Benaocaz, just like any other procession in this village, the crowd is part of the whole thing.

Those who weren’t dressed up to entertain the children, walked behind the Kings and their donkeys. The Kings carried sacks full of sweets and threw handfuls out as they went from one end of the village to the other.

Half way round King Baltasar lifted his sack up and the top half of the sack fell plop into the floor in a pile by the donkey’s feet. Baltasar was so convulsed by laughter that for a moment he doubled over and nearly losing  his balance. He managed to recover and move on, leaving the children free to dive straight into the pile of sweets.

Finally, the procession got to the plaza where a stage had been set up with three thrones. By now, Benjamin had disappeared into the bar for a beer, but I was keen to see what happened next.

The Three Kings hand out presents

The Three Kings stood in front of their thrones on the stage. The children got themselves ready. The excitement was rising. They knew what was coming. First more sweets were thrown out, followed by plastic footballs. The kids scrambled around to catch them. Soft toys were lobbed out next. With a catch that would impress any cricket team, the man next to me caught one as it flew through the air for his toddler.

Eventually, the Kings took their seats on the thrones. The children were asked to line up in order of age. One by one, starting from the youngest baby in the village and working their way up through the age groups, the children of the village, were called up to the Three Kings to receive a present.

I felt emotional. It must be magical as a child in Spain to think that those people who deliver your presents overnight have come to your town or village to hand out presents and sweets before they even get to your house.

As I looked around, most of the villagers I know were there to watch the children receive their presents. It’s a special night all over Spain, but I have to admit that this was one of the loveliest Christmas processions I have seen so far.

Eventually, after a wonderful evening of processions, it was time to go down to the coast to stay with family in Chipiona ready for the big day.

It’s almost compulsory to get up at dawn on January 6th (luckily dawn is not until around 8.00am at that time of year in the south of Spain) and stuff your face with the traditional ‘Roscón de Reyes’  (The Kings’ Cake) while everyone opens their presents and drinks chocolate caliente (hot chocolate).

Traditionally, the Roscón, a round cake, is freshly made at the baker’s and delivered or collected ready to eat for breakfast on January 6th with coffee or hot chocolate.

Of course, we had been unable to resist taking with us a Roscón cooked in the wood-burning oven at La Panaderia San Anton in Benaocaz.  As a result, on January 6th there were two enormous cakes on the table, one from the bakery in Chipiona and the other one from Benaocaz.

Traditionally, the Roscón has little surprises inside, similar to a Christmas cracker. There’s always a little figure of a king and a dry broad bean. If you find the king, it means a year of good luck. If you happen to get the broad bean it means you get to buy the Roscón the following year.

What a deliciously sweet start to the twelfth and last day of Christmas.

2 thoughts on “The night of the three kings; Christmas in Spain and the magic of Three Wise Men on donkeys”