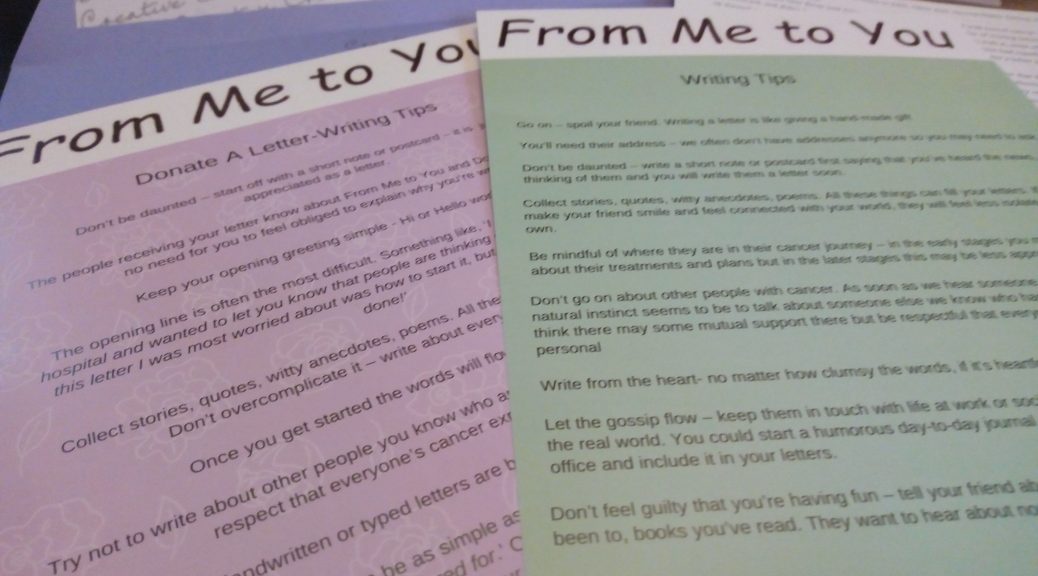 Alison and Brian, the facilitators for the workshop From Me to You, got stuck in Bristol’s infamous traffic congestion on the way to the venue. While that may have sent many in to states of anger, impatience or nerves, Alison and Brian arrived with an air of serenity about them that made it difficult to believe they had actually crossed Bristol in rush hour. I was struck by the aura of contentment and peacefulness that surrounded them throughout the workshop.

At the end of the workshop, having written a letter to donate, I understood this peacefulness and felt my own warm glow.  Both feelings are still with me as I write this post.

The story behind From Me to You

Alison and Brian’s story is beautiful. I first heard it on Radio Bristol and signed up immediately for the workshop. Alison and Brian met in India on a yoga retreat. Although they didn’t have much in common, they kept in touch and met up one day for a drink back in the UK.

Unbeknown to Alison, Brian had just been diagnosed with cancer. After sharing her news, Alison turned to Brian and asked what he’d been up to. Before he knew it, Brian had announced that he had cancer. Alison reacted by saying “I’ll write to you to cheer you up”. Alison has no idea where that came from. She wasn’t a writer (at the time) and couldn’t find anything funny in cancer to write about. So, she started to collect anecdotes, funny things she’d overheard and even added her own humorous twist to real events.

At first Brian didn’t believe that Alison would write to him, but two weeks later a letter arrived on his doorstep. For two and a half years Alison wrote to Brian once a fortnight. Brian never wrote back in all that time, but he did take the letters with him to keep him company during chemotherapy treatments. They made him laugh and he loved receiving them. He shared the letters with friends and family and it gave them something else to talk about, other than his cancer.

When, finally, Brian was given the all clear, he appeared with Alison on Radio 4’s The Listening Project to talk about the letters.

People started to ask them for advice about what to write in a letter to a family member or friend with cancer. Before long the charity From Me to You was born.

During the workshop, we talked about the power of letters and how good it feels to get a hand written letter from a friend. We also talked about the effect letter writing has on the writer. Then it was time to listen to some examples of letters that people had written and the reactions of those who had received them.

Letters don’t need to be complicated – a simple list describing things that make you happy is more than enough. It’s the intention behind the letter that’s important, the feeling you send out to the reader as you connect with her or him to show you care.

Towards the end of the workshop, Alison and Brian spread a gorgeous range of cards, handmade cards and stationery on the table and invited us to write.

I chose a handmade card with a pumpkin on the front and wrote about my memories of cooking pumpkin in Spain. It wasn’t rocket science, it was just a memory. Something I shared about the reason I’d chosen the card. As I chose to donate my card, I don’t know who I was writing to, but strangely enough it didn’t matter. I was still reaching out and making a connection.

The intention was powerful

I love writing, journaling and writing for wellbeing, but I had no idea of the after-effects this type of writing would have on me. While journaling we tend to look inwards and work out our own feelings. For me, journaling is a tool to make decisions I’m not sure about. This was different. Through sharing a memory, I was reaching out. I was thinking about somebody else, even though the memory was mine, and I was telling the story.

Alison and Brian were right. The intention was powerful. I felt warm and fuzzy on the inside driving home despite the cold November evening. This morning I got up and wrote a letter to a friend whose mum passed away from cancer this year. I wanted to let her know I’m thinking of her.

This remarkable charity now travels around delivering workshops and encouraging people to write letters. They have also set up the Donate a Letter campaign so that people can write anonymous letters to cancer patients in UK hospitals. Letters come from as far afield as Australia. The charity has received 2,000 letters at the time of writing this.

Card makers and stationery companies donate paper, envelopes and cards for their workshops. Money that’s donated gets spent on stamps to send the letters out.

When you attend a workshop or contact From Me to You, they will send you an information pack with tips on what to write.

For more information, check out their website From Me to You